Either physical or philosophical, every project needs to start with a solid foundation.  Boy, were we in trouble!

It’s not that we didn’t know what we were getting into, we did.  The foundation of Harrop House is at least 110 years old.  It is a ‘Pier and Beam’ foundation, which basically means it consists of some vertical posts holding up a bunch of horizontal logs on which the floor joists are laid.  Ours was a patchwork of makeshift upgrades, and makeshift repairs that have been added occasionally over the past century.

The worst part is that the big old logs that had once held up the house were being consumed by dry rot.  Some to the point that you could pull them apart with your hands.Before we bought the house, we had a foundation inspection, and a couple of quotes to have contractors do the work.  We used this as a negotiation tool to have the sale price reduced significantly, allowing for us to hire a contractor to complete the foundation repairs.  It’s a project I did not want to tackle!

We brought in Benjamin Armstrong from ‘The Last House Standing’ to do the work.  With the approval of the city inspector, Ben came up with a plan to add a completely new pier and beam support structure in between the old logs so that the new beams would first support the entire weight of the house so that eventually if desired, I could remove some of the old members to tidy up the repair.  This prevented the only other (very expensive) practical alternative of jacking up the entire house, and digging and pouring an entire new modern style concrete foundation, and then replacing all of the beams.  With the inspectors approval, we went ahead with the first option.

Benjamin and his team dug and poured a bunch of new footings to support the new posts, and built new triple 2×12 supports to hold up the house.  There were some challenges, and some shocking discoveries, that caused us to wonder just how exactly the house had not previously fallen down.  It was posited that Harrop House sits in a gravitational bubble which causes it to hover in space and time, even though there is nothing physical holding it up (more on this in a later post!).  However I am skeptical, because I am still unable to personally levitate, even inside of the house. I have tried several times.

In the end, after much digging, hauling concrete, a little sledgehammer and chainsaw, and quite a bit of wriggling around on the crawl space dirt floor we now have a solid foundation on which to build our dream house.

The gallery is full of photos from the process. Check it. 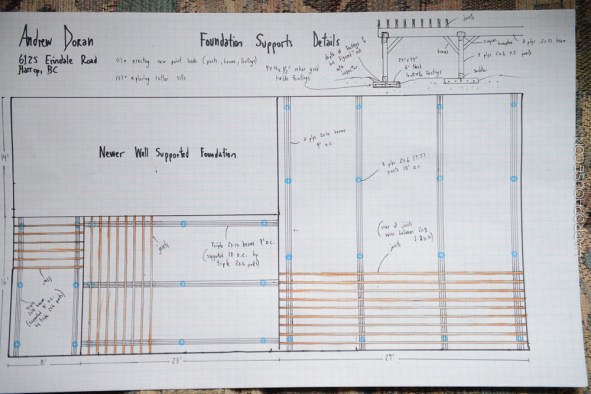